The chaotic and congested middle-class settlement near Attapur here in the city often shadows the grandeur of this 225-year-old Rambagh temple. Though the sprawling four-acre campus has only a handful of devotees visiting everyday, upkeep and maintenance of the temple structure and premises has earned it the Indian National Trust for Art and Cultural Heritage’s (INTACH) Hyderabad Heritage award for 2015 on Saturday. Beyond the grand arched gateway, gardens, goshalas, caravan sarai like rooms bordering the compound or the granite temple structure, there is an interesting story that led to the establishment of the temple during the Nizam era. 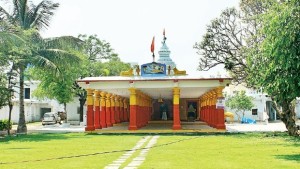 Journey of the deities Rambagh temple remained without a deity for some time even after its construction. The idols of Lord Ram flanked by goddess Sita and Lakshman was brought from Mahabubnagar and belonged to Travancore in Kerala.

Apart from the panchaloha deities of Lord Ram, Sita and Lakshman here, bigger idols of the trio in black granite stone were installed over the years. Due to an ongoing ownership dispute among the temple trustee’s family members, the temple remains under the supervision of the Endowments Department. This has been ensured by the current trustee, Vinay Mohan Lal Bhatnagar.  The priest is paid Rs 1000 per month towards remuneration. A sum of Rs 800 is alloted for puja expenditure. The watchman receives Rs 800 a month, where as two sweepers and a bhajantri are paid Rs 500 each. The temple is open from 5 am to 12 noon and 5 pm to 9 pm.

Bhatnagar alleges that the Endowments Department supervising the temple has turned a blind eye towards development of the temple. “They are not bothered about the temple land or its proceedings. Even the Lord’s gold jewellery which was taken away by the department has not re-surfaced even once for the Ram Navami festivals,” he says.

Story of the journey Seventy-year-old Desha Bhakta Chari, current priest belongs to the 11th generation of his family. He says, Raja Bhavani Prasad Bhatnagar, who hailed from Delhi, was working with the Finance Ministry of the then Nizam government and was an ardent devotee of Lord Ram. While the arrangements for his only son’s wedding were in progress, the son died all of a sudden one day. Following this, the dejected Raja upon the advice of his family priest Gunda Chari built a temple. However, they were not able to find a deity for the temple.Rumour has it, the priest says, one night, Lord Ram appeared in the Raja’s dream to ordered for the idol to be brought from Travancore in Kerala. It had been lying unattended in a salt godown in Gadwal Samsthan in Mahabubnagar. It was then that the deities were brought and installed at the temple here.

The priest Venkata Ramana Chari, who accompanied the deities from Kerala to Mahabubnagar, too, then, shifted to Hyderabad along with the deity. “We have been doing our best to upkeep the premises. Presently, we are left with only four acres of land. Rest has been encroached. There is a crunch for funds,” says the priest who retired in 2002 as chief engineer from state irrigation department. A post graduate in Structural Engineering from Osmania University, Chari took over the duties from his father in his early 20s. Though he was not available always, he says he could manage as a part timer. Post his retirement, he has taken full charge. However, he is unsure about the future of the temple as both his sons are busy with their own lives. From generations, the legacy has been passed on from father to son. “They have their own professions and independent lives. They do not show any interest in the family legacy. Lord Sri Ram will find a way once I am no more,” states the priest who lives with his wife at the temple compound itself.