Son et Lumiere or sound and light show is one of the most interesting tourist draws at heritage sites around the world. Visitors and guests sit down to enjoy an hour of dramatic telling of the story of the tourist attraction. The Golconda fort has had a sound and light show for a very long time where the USP used to be the voice of Amitabh Bachchan. 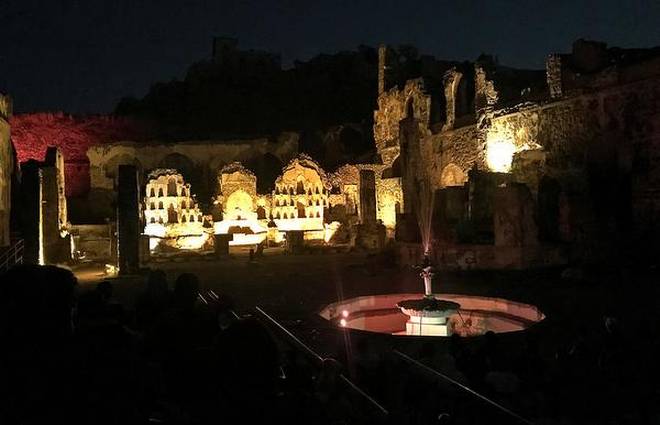 Beginning with a ghazal rendered by Jagjit Singh Ek gulshan tha jalwanuma,the show begins on a promising note about the Golconda fort that has seen Yadava, Kakatiya and Qutb Shahi dynasties rule the region from the hillock fortress that commands stunning views of the surrounding area. It dwells into the origin of the name Golconda, the older name of Mangalawaram, before meandering into dates with imaginary dialogues between Kakatiya ruler Prataprudra and his commander. The threat of invasion by Delhi ruler Allauddin Khilji is shown as the reason for building the strong mud fortress.

The dates of Kakatiya rule, Musnuri Nayaks rule and the beginning of Bahamani rule in Golconda are jumbled up enough to leave one scratching their heads as Allauddin Hasan Bahman Shah defeats Kapya Nayak for the second time and tells him: “Golconda will remain in our possession.”

After this one dramatic episode, the story of Golconda becomes one big family drama with lot of Telugu songs and laughter in the palace courtyard that begins with the treachery of Jamsheed Quli the son of the first Qutb Shahi king Sultan Quli Qutb ul Mulk.

The very palace inside the Golconda fort where the audience is seated on a raised platform watching the colourful lights highlight one historic feature or the other. As one song is followed up by another interspersed with dialogues, the audience begins swatting mosquitoes. The mosquito repellent cream passed around at the beginning of the show is enough for the face while the flying bloodsuckers target exposed limbs.

Along with the distractions is the storied fable of Muhammad Quli, the founder of Hyderabad. The knock on the door of Bhagmati’s house is as dramatic as the flight from the fortress in the stormy weather. “How did you find your way to my house, my lord?” asks Bhagmati.

“Your face was beckoning me like a beacon in the night,” says Muhammad Quli as the audience erupt in laughter.

“There is a Meera bhajan, there is Telugu poetry and all the stories that are part of the oral history are dramatised in the sound and light show. After watching the hour-long show, I came out disappointed. This was a fort which has seen some of the greatest battles but the story ends up like one big cultural extravaganza. The only bit I that held my attention was the telling of Kohinoor diamond,” says Venkatesh Goteti, who watched the show recently.

The story of Kohinoor, Kuchipudi dance, an episode of Ramadas’ imprisonment and subsequent release, ends with the story of the faithfulness of Abdur Razzak Lari and the treachery of Abdullah Khan Panni draws the curtains on the sound and light show.