Himayat Sagar is an artificial lake about 20 km from Hyderabad in Telangana, India. It lies parallel to a larger artificial lake Osman Sagar. The storage capacity of the reservoir is about 3.0 TMC. 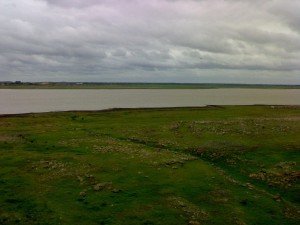 The construction of reservoir on Esi a tributary of Musi River was completed in 1927, for providing drinking water source for Hyderabad and saving the city from floods, which Hyderabad suffered in 1908. It was built during the reign of the last Nizam of Hyderabad, Nizam VII and so it is named after his youngest son Himayat Ali Khan.

The Himayat Sagar and Osman Sagar reservoirs provided continuous water supply to the twin cities of Hyderabad and Secunderabad until recently. Due to population growth it was not sufficient for water supply to Hyderabad city.

The engineer at the time of construction was late Khaja Mohinuddin S/O Mohammed Hussein, Madri,

The grassy area adjoining the lake is an ideal picnic and recreation spot. The road atop the bund is popular for a good drive.